I love award shows for the glitz, red carpet moments, and more importantly watching people being recognized for their hard work. Of course that doesn’t mean I agree with every award. There are times I’m happy and others were I’m booing at the television. Due to this, I thought I’d share with you some Oscar love.

I can’t wait to see tonight’s glitz, most memorable/not so memorable moments, and winners.

On Twitter today, a bunch of inspiring messages appeared on my feed with the above hashtag. If you wondered like I did why they were appearing today, here’s the reason. It’s in response to a book, ALL THE RAGE, that was released in April of last year that deals with a girl being raped. The author and her PR team wanted to do something to show support for girls in these type of situations. “In April 2015, for the North American release of All the Rage, #ToTheGirls, a hashtag campaign dedicated to letting girls know they were seen, heard and loved, was launched.”

AWESOME! It had such a good turnout that they did it again, today, for the UK release.

The part that speaks to me is about girls being seen. When I was sixteen, I felt invisible or only seen when something I did or wore didn’t fit in with the popular group. I desperately wanted to be seen by people who weren’t my family. I hope that this does reach out to girls everywhere, including my own, so they can know their not alone in their feelings.

The well-known graffiti artist, Banksy, left an important message on a cement bridge at an immigration camp in Calais. 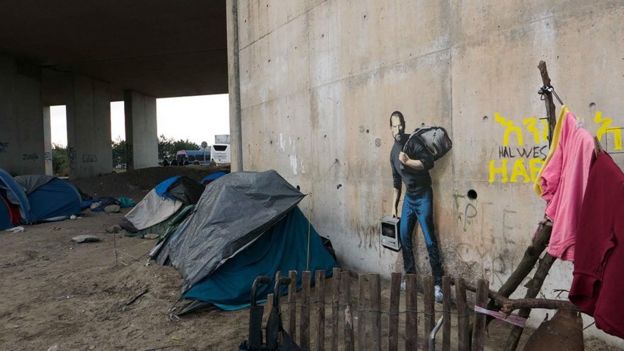 Did you recognize Steve Jobs as the man in the picture? I didn’t realize that he was an immigrant. It’s interesting to stop and think about the what ifs. What if he hadn’t come to this country? Would he still have the resources and knowledge to develop the company that he did? Would there be Apple products in the world? Where would we be if Steve Jobs hadn’t founded Apple?

There’s a great op ed piece in THE NEW YORK TIMES about “harsh words leading to violent acts.” It states that when people publicly criticize a group of people with inflammatory words that group ends up being acted upon violently. The author goes on to give several examples of this happening throughout history including events in current news.

I’ve seen this occur in a microcosm. When I was in high school, my older sister was bullied by three girls. In less than a year, these three girls convinced the entire 11th grade that my sister was a lesbian and “not normal”. My sister was/is bossy and into “geek” stuff, but they never teased her about that. Instead, they made up stories and spread them around the school. Even our own neighbor believed them, although, she saw my sister going out with her boyfriend all the time. These three girls picked words that had a powerful, negative impact and the rest of the school reacted to my sister because of it. She was shoved, called names, and teased horrendously until the day she graduated. To this day, she is scarred because of it.

The poem stick and stones will break my bones, but words will never hurt me is a lie. Words are powerful and they not only hurt, but they incite other people to react verbally and physically.

Do you agree or disagree?

If you haven’t heard about this new app, Peeple, that’s supposed to be coming out soon, let me fill you in about it. The founders of Peeple wanted an app that would allow other people to rate their babysitters, ex-boyfriends, neighbors, coworkers, and etc. So, let’s say you want to hire a babysitter and you go on the app to see their rating. The person who entered that information about that particular babysitter gets to rate the babysitter one through five stars, give the app owner the babysitter’s phone number, and write a review. If that isn’t evasive enough, the babysitter doesn’t get to opt out of the site because once you’re in, you’re in, baby, until the dang thing shuts down. If you want to read more about it, here’s the link.

This appalls me in so many ways. First, I don’t want my daughter, who is a babysitter, to be rated or have her personal information entered into a site that she can’t control. I, as her parent, have worked hard to help her keep her personal information as private as possible, especially since I have a person from my past who won’t move on. Second, people can be mean and cruel, especially online, where some people are nastier than they are in person. In addition, there can be miscommunications between my daughter and an employer and my daughter won’t be able to present her side.  I could go on and on, but I’ll spare you the rant I gave my hubs.

The good news is that I’m not the only one who feels this way, it seems from all of the outrage that the majority of people are angry about this app too. I’m hoping all of the negativity will keep it from coming out in November.

What do you think about this app? Should it be allowed?

The incident with Ahmed Mohammed being handcuffed for bringing a homemade clock to school is sad…and terrifying. It’s another stark sign of how racism is alive in the United States. In one of the news articles it says that this highlights the problem the south has with racial profiling. However, I disagree. I think this could and would happen in any state, especially with the anniversary of Sept. 11 only four days ago. This situation is a sad commentary on our nation!

I knew YA was popular, but I had no idea until I checked out this post in Publishers Lunch.

I am deeply saddened by the events occurring in Ferguson, Missouri and in many ways it’s reminiscent of the civil rights movement. There are so many things I find appalling about what is going on, but the one that surprised me the most is the fact that only 3 of 53 policemen/women are African American. In a city that is two-thirds black, that number is another reminder why affirmative action is still needed.

MIT researchers have invented a book that allows you to feel what the characters are feeling. All you have to do is strap on a vest that plugs into the book and the vest will react to the page that you are on. The wearable vests inflates, vibrates, and changes the light bulbs on the book to different colors so that it reflects mood lighting. Read the entire article.

I love reading articles that help my writing and I found a great one on 5 myths about police officers. My favorite is number 4 because it surprised me.

Myth #4: We spend all of our time fighting crime.

The amount of time officers spend investigating and forwarding charges on crimes is diminishing as a percentage of our total time. An increasing amount of time, particularly for patrol officers, is now spent on service calls and dealing with persons with mental illness. The calls where individuals with untreated mental illness use violence get a lot of media attention, but there are also everyday calls that require diplomacy, training, and a great deal of time. As more agencies and social services are defunded or choose not to provide services to the mentally ill, it has been falling to the criminal justice system to become a de facto front-line social service agency.  This is a profound and unintended consequence of many years of policy decisions.